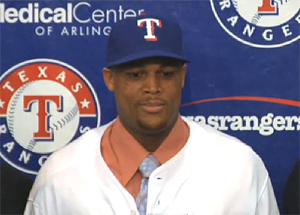 Texas Rangers finally managed to reach terms with player rep, Scott Boras, and sign Andrian Beltre to a 6 year deal reportedly worth $96 Million. Texas will have a 3rd baseman who has shown great defensive skills in addition to being a pretty good guy to have swinging away in the line up, I am sure he will probably bat 4th behind Hamilton, giving Texas some good power in the middle of the line up.

Boras managed to tie another of his players up till his late 30’s assuring him the time to find newer talent to screw major ball clubs into dishing out heaps of greenbacks.

Congrats to Alomar and Blyleven, for making the HoF.

The St Louis Cardinals are hoping to join the ranks of the big money spenders as they re-open negotiations with Albert Pujols, however they have a small window of opportunity the Pujols reportedly will not continue negotiations after he reports for spring training.

More lists have been coming to my attention, not just from print and internet media sources, not just from bloggers making there dream selections, but twice now on MLB Network I have seen them giving us their top 9 or top 25 this or that.

It just so happens that two of the lists MLB Network laid out included the same guy high up on both lists, the one list top ‘Short Stops Ever’ the other list current players destined for the ‘Hall of Fame’. 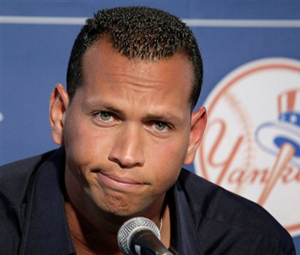 The player high up on both lists is none other than ‘Alex Rodriguez‘ it seems that since Texas gave him a huge payday to be Short Stop it makes him better than Derek Jeter in the eyes of someone on the MLB Network, on to the other list, they also rank him as the number 1 current player headed to the ‘HoF’, so now the PED’s are going to be overlooked.

I don’t care when any of them, Bonds, A-Rod, Manny, McGwire, used the PED’s, they should still be excluded, just because the testing wasn’t mandatory and the drugs may not have been banned when they chose to digest them, the fact remains that it is still cheating. Anyone knowingly doing things to increase performance that they otherwise wouldn’t want the world to know about or is not a natural process of fine tuning your skill set is wrong.

Let any of them in the HoF and you have to revisit and allow Peter Rose and Shoeless ….

The New Year was ushered in around the world with some pretty major firework displays, in fact I’d have to say the ball dropping in New York was pretty lame compared to most of the other events around the world.

If you didn’t notice I managed to get ‘New York’ and ‘lame’ in the first paragraph of the new year, I am sure there will be some replays of that as the year gets into full swing. We are still in wind up mode at the moment with spring training still a few weeks away and most getting their resolutions out of the way. It may be that some confuse resolutions with wish lists though, doesn’t matter how you word it, if your trying to get someone else to do something that you want to happen, that’s wishful thinking not a resolution.

One such ‘wishful thinking resolution’ I have seen and heard is the desired introduction of added replay abilities on critical baseball plays, similar to the current home run replay, but used in a wider variety of plays.

It’s obvious that last year the fatal error by Jim Joyce sparked a more wide spread call for the added replays, but is it really in the best interest of the game.

As I see it the cry for more replays is lead by those that have enjoyed technology their whole lives, people that had video games as the toy of choice as they grew up, as kids their parents had a tendency to use the television as a method to keep their kids in one place so they could do their thing.

There is no question that the error by Jim Joyce would have been corrected following a review, but it is deemed critical because it was at the end of the game and it prevented another perfect game, but would the calls for replay have come if the game was a 21-0 blow out, my guess is no, it would have been just another one of those entries of umpires screwing up with no major effect.

Adding more replays for the umpires to review would create more questions, especially if they still got the call wrong as happened a couple of times during the 2010 season. I say to those wanting more replay reviews, get over it, the human touch of umpires screwing up is part of the game.

Use your ‘resolution’ for something more constructive, like ‘screaming a little more’ at the umpires when they screw up instead of complaining there’s no replay….

It is becoming clearly evident that the Yankees organization is establishing a new chain of command. The old one being ‘players dictated terms’, the new one being ‘front office dictates terms’.
If for any reason you don’t think the players were calling the shots under the ‘old man‘ then your obviously either a Yankee fan or a closet Yankee fan. The new Yankee way of the ‘front 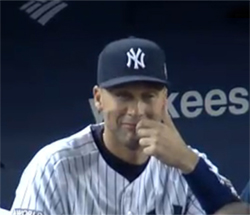 office’ calling all the shots is telling the face of your franchise to test free agency, this is the ‘son of the old man’ saying there’s a new boss in town.
Some say they are crazy to do this with Derek Jeter and just as crazy to keep Mariano ‘Mo’ Rivera dangling, I think it’s just smart business. If it wasn’t for the Jeter saga everyone would be focused on the Yankees fight to get Cliff Lee and we all know they’ve lost the battle of getting the number one starting pitcher the last couple of times, how many thought the Yankees had Halladay in the pin stripes last year and even more thought they had Cliff Lee mid season. Derek Jeter is taking one for the team, he knows the deal is done, it’s just a case of keeping the press away from the pressures of the Cliff Lee deal.